Charlotte Johnson Wahl is a wildly original and provocative British Painter. Born in Oxford in 1942, Johnson Wahl’s artistic talent emerged early, but she received little formal training. She studied English Literature at Oxford University, and built a career as an artist against a busy backdrop of marriage, motherhood and multiple house moves.

Johnson Wahl’s canvases are a rich blend of joyful enthusiasm and unresolved tension. Her paintings document her life – informed by razor-sharp intelligence, hippy humour and profound empathy. These paintings are a source of solace for those who find the world over-whelming and a source of inspiration for those who share Johnson Wahl’s keen eye for beauty, colour and composition.

Johnson Wahl held sell-out shows at the Maudsley Hospital in 1974, in Brussels in the late 1970s and at the Gavin Graham gallery, Notting Hill, in 2004. Her recent retrospective at Mall Galleries, London, was a huge success. Johnson Wahl’s life is documented in Painting The Johnsons, a Riverdog Production for Sky Arts. Despite suffering from Parkinson’s Disease, Johnson Wahl still paints every day. 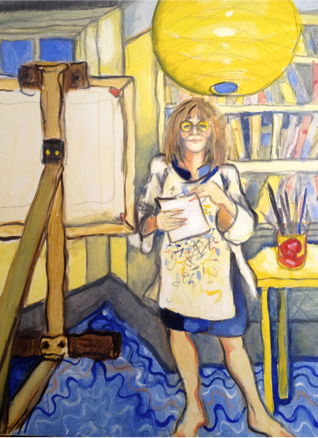